Honolulu–Earthjustice filed suit Monday against a state agency it says is sidestepping the law when it comes to the regulation of tropical fish taken from Hawaii’s reefs for the commercial aquarium pet trade.

After sending a letter earlier this month to the state Department of Land and Natural Resources with these allegations, and getting no response to a request for a meeting, Earthjustice filed the suit in state Circuit Court.

“We’re going to court today to safeguard Hawaii’s treasured marine life against an absentee agency that insists on giving the aquarium industry free rein to strip our reefs and export our marine life to mainland hobbyists,” said Earthjustice attorney Mahesh Cleveland in a news release. “(Reef wildlife collection) is devastating for our reefs, and is scandalous in light of the court’s instructions to halt aquarium collection until the agency and industry fully come to grips with the environmental impacts of what they’re doing.”

The suit’s plaintiffs include Native Hawaiian cultural practitioners Willie and Ka‘imi Kaupiko. DLNR is named as the defendant.

Earthjustice alleges that DLNR instead “created a loophole” by issuing commercial marine licenses and allowed for the collection of aquarium fish, as long as no fine-meshed nets or traps were used.

DLNR previously required both the aquarium permit and marine license, but began accepting only the latter after the ruling. Since 2017 it has issued or renewed at least 72 commercial marine licenses to aquarium collectors, the suit said. Additionally, DLNR is not actively verifying self-reported methods of collection.

Using the loophole, commercial collectors have taken millions of reef wildlife critters from Hawaii reefs for aquarium purposes over the last two years.

“Fish extraction at these levels would be extraordinarily difficult or impossible without fine-meshed gear,” the suit said.

DLNR’s Division of Aquatic Resources maintained, however, that it has been following the law.

“Under current law, commercial aquarium fishing is allowed as long as collectors have a valid commercial marine license and are using legal gear and methods,” said DLNR in a statement. “This is applicable for all areas except West Hawaii, where all aquarium collection is prohibited until an environmental review is completed.”

“We respect Earthjustice’s right to pursue this matter in court if it believes that is the right thing to do,” DLNR continued. “We have not seen the lawsuit and cannot comment on its substance.”

Sales of aquarium fish have brought in more than $1 million from 2018 to 2019, according to catch data reports, while the industry itself has estimated the trade brings in an annual average of at least $2.6 million.

The suit said this unregulated activity threatens the livelihood of Native Hawaiian practitioners like Willie Kaupiko, a resident of Milolii, who is alarmed by the “large numbers of immature fish removed from the reef by such practices.” That severely reduces reproductive opportunities for the remaining fish populations, the suit said.

In Kaupiko’s cultural practice, one takes only what one needs to feed one’s family, leaving the rest to replenish itself.

He has also observed firsthand declining numbers of fish on the reefs, particularly the Achilles tang (pakuikui) and goldring surgeonfish (kole), as well as a decline in reef health in areas open to aquarium collection over the decades.

Aquarium fish are mostly herbivores, the suit said, and play a vital role in controlling algae growth in the coral reef ecosystem. 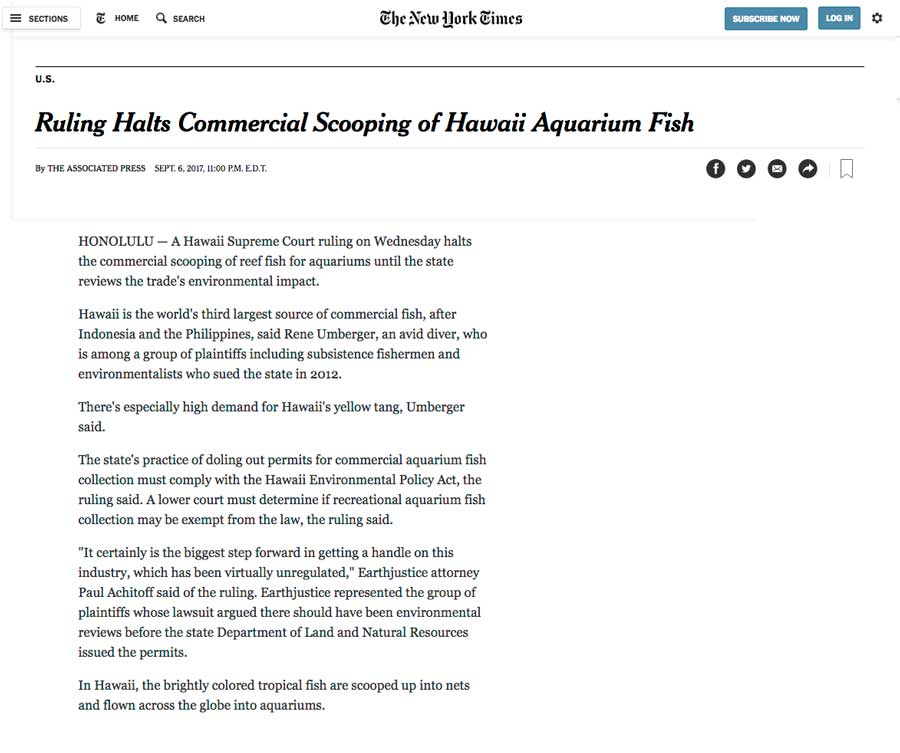 Link to complete article on Uprising.

The fish in your aquarium may have been stolen from Hawaii’s coral reefs
Adam Wernick
PRI’s The World
August 28, 2017

The Campaign to End the Aquarium Trade in Hawaii Surges Ahead
February 14, 2017
The Huffington Post

BOOK REVIEW: “REEF LIBRE” by Robert Wintner
The Bookish and The Romantic
10/26/15

For Kihei man, there is life beyond snorkel gear
Eileen Chao
The Maui News
August 30, 2015

Wildlife Species are a Public Trust, Not Disposable Trinkets November 24, 2012

The Dark Hobby Redux: A 2012 update on the global 3-tier campaign to ban aquarium trade trafficking, Part 1 of 2

The Reef as a Community: Cold and Fuzzy Ke ola Magazine March 9, 2011

The Dark Hobby; Can We Stop the Devastating Impact of Home Aquaria on Reefs Worldwide? August 21, 2010

Huffington Post Having Our Oceans and Eating Them Too July 13, 2010

Honolulu Advertiser Where the Wild Things Are April 15, 2010